I'm related to the Bounty mutineers!

I've always wished I had ancestors, famous ancestors, ancestors I could learn about. A cousin of my mother's has just found out that we're related not only to William the Conqueror but to TWO of the people who were on the H.M.S. Bounty. 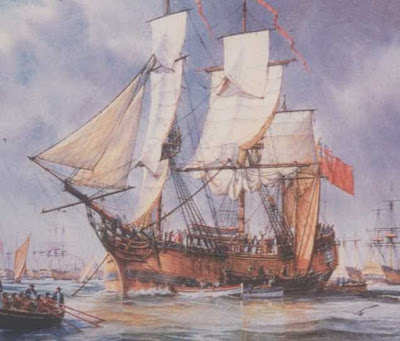 They are Fletcher Christian, who led the mutiny, and George Stewart, a Midshipman who was NOT a mutineer. He gave himself up in Tahiti, was clapped into irons, and drowned when the ship taking him back to England was wrecked. He had a wife in Tahiti, so I probably have cousins there, and I know Fletcher Christian had kids on Pitcairn's Island, so I have cousins there, too.

What makes this especially exciting, though, is that I know a lot about the Bounty--I am completely fascinated by the English navy in the 18th century: Jane Austen's brothers, Nelson, the Bounty, the Patrick O'Brien novels.....I love them all and have even plottted out my own 18th century navy story, Philippa. Maybe I WILL write that next after all!
Posted by Libby Koponen at 7:22 AM

Well that is pretty cool too!

syferium said...
This comment has been removed by a blog administrator.
2:01 AM

I am a direct descendent of George Stewart, his wife was "Peggy", they had one child, Charlotte, who at 18, left Tahiti and was married on a ship. She came to Santa Barbara and remarried having 6 children, one being my 4th great grandmother. George and Peggy have no descendents in Tahiti, but Christian does. "Peggy" was also a Tahitian Princess, her father was the Chief of the Tribe that owned most of the Islands.