THE PRICE OF THE LAND


No one else had bought it, because they thought:
a) it would be too expensive
b) no one would ever get permission to build on it
c) it had no "access" -- I wouldn't even get permission to drive a shepherd's hut onto it

I got it for about a fifth of what land in the village normally goes for. Many people told me not to get it --
"If you could build on that site, don't you think someone would have done it already?"

But a builder whose family comes from the island and who has built most of the new houses there, had another idea.He said that IF I couldn't get permission to drive the hut over the three meters between my land and the road, he'd LIFT it over with his crane.

I bought the land.

It took more time than I'd thought it would to plan, measure, daydream and design the hut down to the last detail with the hut's builder, Dave. It was also much more complicated than I had ever imagined to figure out all the practical details -- apply for planning permission, get water, electricity, Internet, a telephone, transport the hut to the island, get a loo etc. (outhouses aren't allowed--for those who are curious, I eventually bought a portable toilet, put it in the stone byre that came with the property, and emptied it every week into the public toilet on the pier...showers I took in the community center which luckily had a coin-operated one that was open 24 hours). The hut itself had a tiny sink -- where the water would come from was unknown at that point.

By the time I went to Wales to look at the hut, I still didn't have permission to put it on my land; but I told Dave to go ahead anyway and went to the island, where I stayed in a FREEZING caravan and the local builder and one of his sons and I planned exactly where the hut would go and marked the ground. 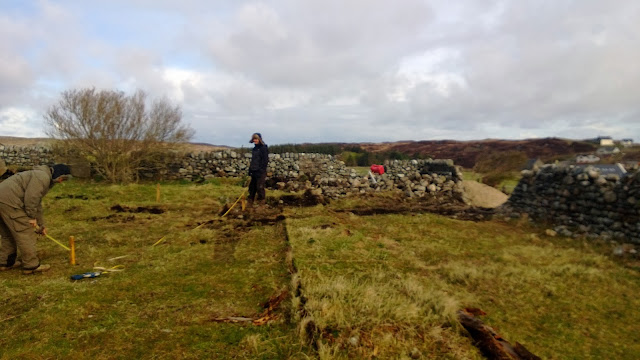 By the way -- you may be thinking from the way Roy and his son are dressed that it's winter, but this was in the middle of May. 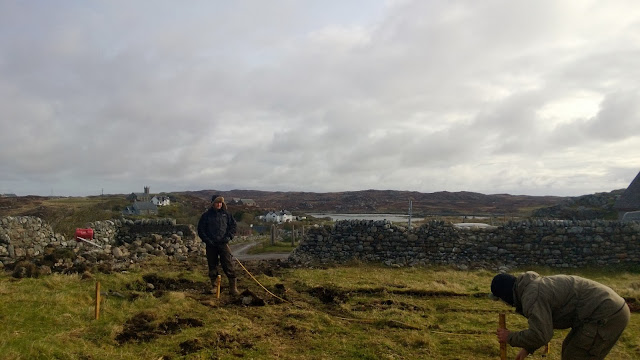 Roy said he should make concrete foundations for the wheels before the hut itself  arrived, and so they knocked down some of the walls to get their machinery in.  It wad lucky they did, because the hut weighed a lot more than Roy's crane could lift.

When the hut arrived on the island's pier, Dave and his son -- who had spent many hours driving it to Oban from Wales, looked shell-shocked: not so much from the journey -- but at where they had landed.

The island is not at its best from the pier: you see mainly rock. It was a grey, cold, windy day -- and as I found out within a few minutes, Dave could absolutely not imagine why anyone would want to stay there. Even one night was almost too much for his twenty-something son.

But I loved the island from the first day I saw it.
Posted by Libby Koponen at 11:05 PM