The world has changed so much since I was a child that I usually assume modern children will find the things I loved then incomprehensible, or boring, or something. So when I mentioned watching the DAVY CROCKET 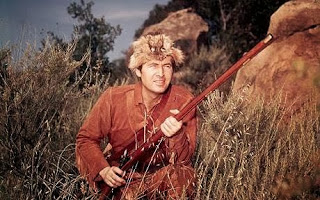 I'd loved over dinner the other night, I was surprised when a seven-year old begged me to let him come over and watch it with me.

I warned him that he might find it boring and told him to tell me if he did....but from the very start, he loved it. His eyes widened; he said things like:
"This is so cool!"
"I love it!"
"Why would you say this is boring?"

His only criticism was that Davy wasn't wearing a blue and white uniform, like Andrew Jackson's soldiers--he described theirs as "jazzy."

I have  admired Davy Crockett fervently ever since I first saw the show -- and even more after learning more about him as an adult.

So I pleased as well as surprised that the movie, which was made in 1955, included Congressman Davy Crockett voting against Andrew Jackson's Indian Bill -- the one that resulted in the Trail of Tears. That -- in real life and the movie -- was the end of Davy Crockett's political career. The movie included a speech that probably went right over my head as a child, about how the government had promised that land to the Cherokee and it was wrong to let "a few landgrabbers" who just wanted to make money deprive them of it. He also talked about how "all of our people, whatever the color of their skins," had the same rights....and how the fact that it was being done was the fault of Congress, "because we aren't doing our jobs right."

It's true that Jake fidgeted a bit during this part--but his interest perked up again as soon as Davy galloped off to the Alamo. That Disney distorted: in real life, after Davy lost the election (as a direct result of his stance on the Indian Bill: before that there had been talk of running him for President), he was asked to make one last speech. He did, and it was brief:
"You can all go to hell. I'm going to Texas."

It was sheer bad luck that he arrived just in time for the Alamo. But in the movie, they made it a planned choice.

One of the few scenes I remembered from my last viewing (as a child!) was Jim Bowie, sitting up in bed with a fever --  but firing pistols, one in each hand, as Santa Ana's men run in to kill him.

The movie ends with Davy -- all 6' 6" of him -- swinging his rifle at the uniformed soldiers attacking him from below. Walt Disney felt that it would be too upsetting for children to see Davy die, so we see only that, and then hear a song about "history tells that they were all cut down," but....(much like the ending of les Mis, really) then we see a flag and the song goes on about freedom.

Jake thought the ending should have been more "realistic," and that if we didn't see Davy die, we should at least have seen one of the Mexican soldiers firing at him....but I now like the idea of Disney letting children have as much reality as they can handle. He leaves it up to them and I think that was a good decision.

I don't think I would have liked to see Davy Crockett's dead body, then or now. And I have to admit that I was absolutely astonished at how good this movie is. I loved it as much as Jake did....and would love to write a book about Davy, the REAL Davy, who was even more interesting and admirable than the Disney version. But Disney did a great job with this one.
Posted by Libby Koponen at 8:55 PM No comments: