Message in a bicycle basket

Awhile ago, a baseball -- a real hardball -- appeared in the basket of my bicycle.The bike is always parked in front of my house, under this sign, 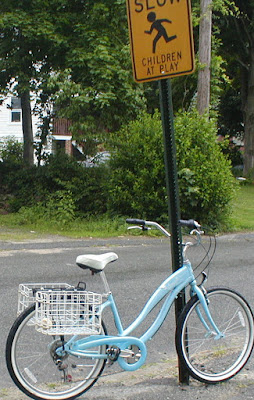 so I thought maybe somebody had found a baseball on the street and returned it to the most likely spot.

But then yesterday I rode my bike to the liquor store to get a bottle of rum for a party, and when I came out, another ball had appeared in the basket: 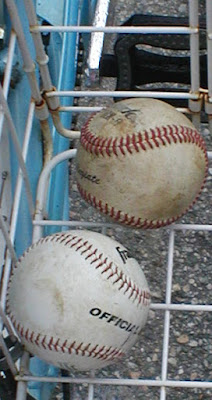 One could be a coincidence -- but TWO? Is this a message? A sign? I can't help thinking that it is, even though the reality may be that my bicycle just looks like a good place to put any baseballs that happen to be lying around. What the message IS I don't know yet; but that's often the way with oracles and ideas for stories, too.
Posted by Libby Koponen at 7:53 AM

I love this! So funny. Wonder if it's the same person putting baseballs in your basket, or truly a coincidence.

I like this too. This could be a really interesting idea for a book!

Oh, that's a great idea! I can see a story opening up like this, and the kid trying to uncover the mystery behind it.

Thanks -- that IS a good idea. Characters and a vague story about it had been swirling around in my mind, but this comment crystallized them into a story with drama and shape.

That is the coolest thing, Libby!