This is Adam's plan for the birthday party I described at Blue Rose Girls: 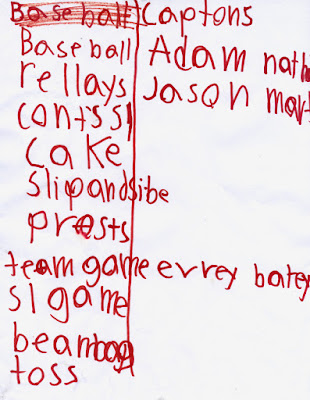 He's only six (well, he was when he made the list!) and reading and writing aren't his strong points....I'm impressed by how thoroughly he planned the party and how much he CARED about it. At the actual party, he cried more than anyone else, maybe because of the contrast between his plan -- his imagined party and the real party. At one point, his mother was trying to organize a relay game and Adam screamed,
"No, no, this is supposed to a _____ game!" (can't remember the word he used and it's probably what the "sl" on the list means, too: individual competition game, with one winner).

His mother seemed taken aback by how passionately he was screaming. They withdrew to discuss it privately, and when they came back, there was none of that team stuff. Adam won the game, too. He's a very competitive little boy, and during the baseball was, first, trying to change the rules and then, when his father wouldn't permit that:
"But it's my birthday! I should be allowed to have four strikes!"
"You should be allowed to cheat?" his father said, with a look that was quite quelling. (Adam adores his father.)

I'm fascinated by the way children think -- I"m interested in the way adults think, too, but kids' thoughts and feelings are more mysterious, partly because they can't really articulate them.

And at least for awhile, their thoughts tend to be really original. At around eleven, a lot of kids seem to start thinking the way they've been taught that they "should" think -- at least, that's what I've observed and read, too. Maybe that's what socialization means. But it never "takes" with some people; and some are probably more original to start with, too. Adam is definitely an original thinker, and that's one reason I like him so much (and am making him the hero of my next book, a short mystery).

The other is that he feels things so intensely: once, he wrote a card to his parents that said on the outside "I love you Mom and Dad." Inside, he wrote: "I love you a lot. Really a lot." There was no occasion; he just made it.

It's an interesting contrast: someone who plans so carefully and feels so intensely. I'm looking forward to starting this book.
Posted by Libby Koponen at 7:12 AM